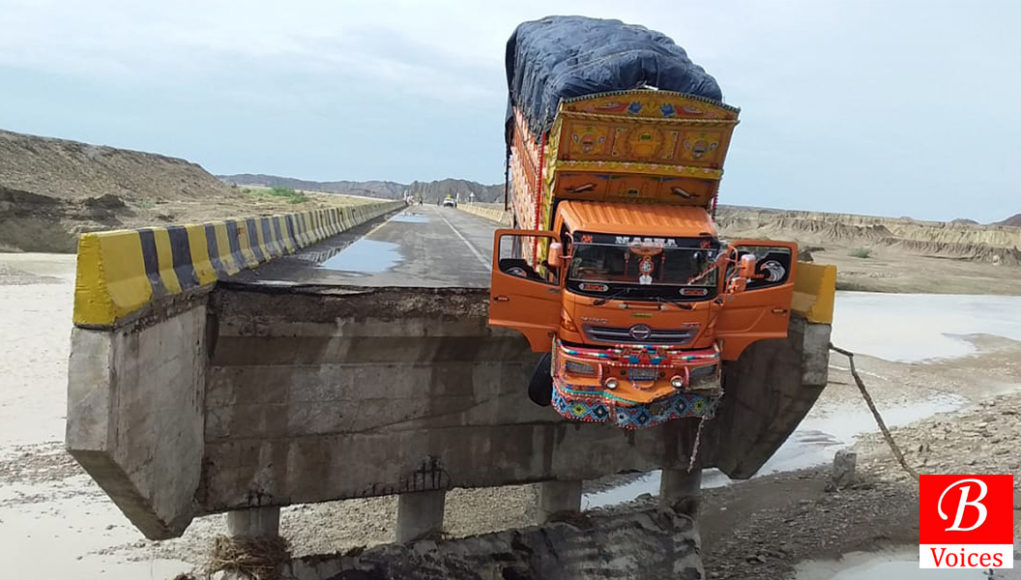 Last week, a monsoon rain alert was issued by the Weather Department. The alert warned that the seasonal monsoon rains could trigger flash floods which would be devastating for the mountainous passways and plains of Balochistan. Over the weekend, the rainfall was not more than the normal average every year, but the devastation it caused was much more than expected.

The flash floods, overflow of seasonal streams, and the collapse of mud houses have so far resulted in the death of 10 people. This number can increase as access to more areas is made available over time. This moderate rainfall wreaked havoc in Balochistan and destroyed the infrastructure of the province in several ways.

First, three major communication highways were blocked due to the flash floods. Land sliding near Fort Monroe suspended traffic on Loralai-Dera Ghazi Khan road, which is the primary road connection between Balochistan and Punjab. The Bibi Nani Bridge washed away in the rainwater in Bolan Valley, disconnecting the road link between Quetta and Sibi, onwards to Sindh. This prevented thousands of people from commuting along this highway. The Makran coastal highway – connecting Gwadar with Karachi – was blocked near Badook area where portions of a bridge were washed away by the rainwater.

An orange truck hanging on the precipice of a broken bridge was the most viral photo from the devastation caused by the flooding. This photo was taken at the Badook area on Makran Coastal Highway and it suspended traffic to and from Gwadar for more than a day. This picture embodies the broken infrastructure in Balochistan.

Second, the rainwater and floods damaged the main gas pipeline carrying gas supply from Sindh to Quetta and up north. The pipeline was damaged in the Bolan region and it disrupted gas supply to Quetta and cities in further north. A small portion of the city, inhabited by VIPs, was provided limited gas supply through alternative means. The majority of the residents of Quetta are without proper gas supply for the last five days. This resulted in unexpected problems for residents who were not prepared for such a situation.

This is not the first time flash floods has destroyed the main gas pipeline in the Bolan region. Still, the Sui Southern Gas Company Limited (SSGCL) has not made concrete arrangements to protect the pipeline in such a situation. It speaks volumes about the negligence of SSGCL and their lack of interest in the welfare of the people of the province. Proper maintenance of the pipeline should be enough to protect it from all sorts of floods but this does not seem to be a priority for SSGCL.

Third, rainfall disrupted electricity transmission. There was no electricity supply in major parts of Quetta for over a day. This power cut was in addition to long hours of so-called load shedding which people of the province suffer due to the flawed electricity distribution policy of the federal government.

Furthermore, Gwadar – the centre stage of $50 billion China-Pakistan Economic Corridor (CPEC) – was also badly affected by this rainy spell. As mentioned earlier, Makran Coastal Highway was blocked near the Badook region. M8, another highway connecting Gwadar with Khuzdar and onwards was damaged from multiple places due to the floods. This means that the city which is the centre stage for CPEC was completely cut off from the rest of the country. How can Gwadar be a functional port and a mega project of CPEC when moderate rain spells disconnect it from the country? The rainwater engulfed the streets and roads of Gwadar in the same way as it did in Karachi and Lahore, despite it being much smaller.

This situation has reinforced the perception that CPEC is failing to improve infrastructure in Balochistan. At a time when other provinces got Orange Line Metro Train and Karachi-Lahore Motorway Main-Line 1 Railway Project, residents in Balochistan got a two-lane narrow M8 highway, which gets destroyed by moderate rains. This situation is a legacy of the government led by the PML-N, but the current government continued with the status quo and failed to compensate for the lost share of Balochistan in CPEC.

Calamities like quarantine of pilgrims in Taftan and now these monsoon floods expose the rotten infrastructure of Balochistan. Infrastructure mainly relies on highways, energy supply, and rail networks and all of these are federally controlled subjects. This means the provincial government cannot do anything about them and the federal government is not interested in doing anything to resolve these pressing problems of Balochistan.

Another example of how the federal government has ignored infrastructure needs of the province is its refusal to upgrade Quetta-Karachi Highway (N-25). Instead, the federal government wants the private sector to build the road on Build Operate and Transfer (BOT) basis. There are many problems with this approach. First, the citizens of Balochistan using this road will have to pay for the construction of this road for decades to come in the form of exorbitant toll taxes. Second, it is too early to assume that the private sector would even agree to this project because some portions of this 790 km highway might not be economically feasible for such an arrangement. The ideal solution to this problem could have been financing it through CPEC but the PML-N government and its nationalist allies from Balochistan back then did not show interest.

The main priority for governments in Quetta and Islamabad should be to upgrade the infrastructure of the province. Without proper infrastructure, Balochistan can never develop and it will act as a stumbling block for all mega projects such as CPEC.