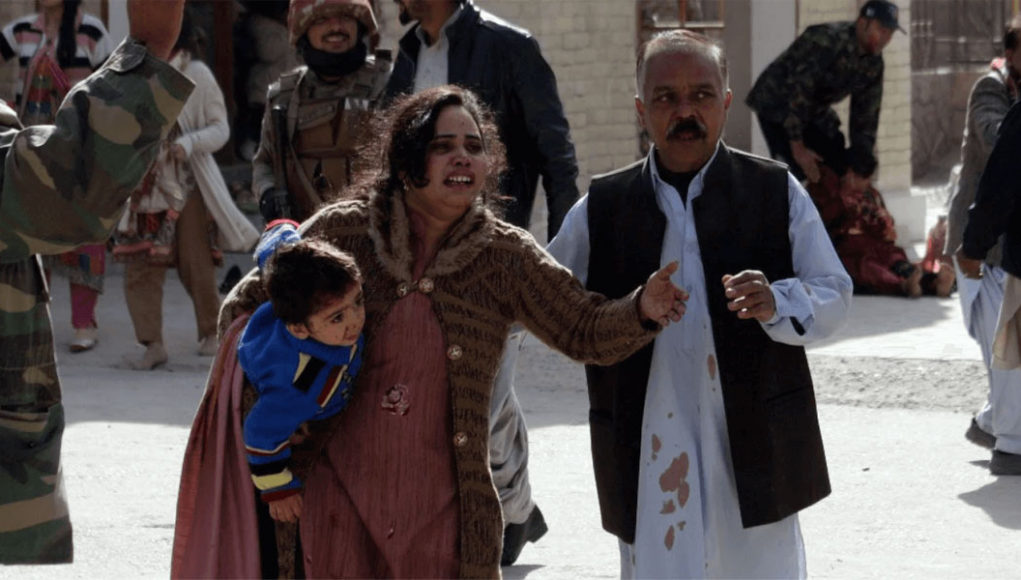 The terrorist attacks on Church was widely condemned and discussed on social media using the hashtags #Quetta and #QuettaChurchAttack.

People tweeted pictures of the church after blast.

#Balochistan use to be a Heaven for minorities – #Christian, Hindu, Sikh & Parsis lived for centuries side-by-side & shoulder to shoulder with Baloch & Pushtoons. Our Prayers & thoughts r with innocent victims of #QuettaChurchAttack pic.twitter.com/QYqjuTBR9E

Journalists tweeted what they knew about the attack and its location.

Here’s what we know: #QuettaChurchAttack at around 1200 Local, during Sunday services
– Quetta’s oldest church, The Bethel Memorial Methodist, targeted
– At least one suicide bomber entered the building and blew himself up, assisted by a fire team or other assailants

The attacked church in #Quetta is just 400 meters away from the heavily guarded civil red zone of #Quetta.

The condemnations pour in.

Terrorism does not respect any religion. Several attacks on mosques in #Balochistan in 2017. Today #ChurchAttack in #Quetta. My thoughts with families and friends of victims. EU stands for FoRB & protection of minorities and fight all forms of terrorism with #Pakistan.

Today Pakistani Christians were attacked and killed at their church while celebrating Christmas. I am praying for them and changing my profile pic to a Christmas tree to stand in solidarity with them. Will you join me? #QuettaChurchAttack

A Mufti also joined the debate.

The Prophet Muhammad pbuh specifically prohibited attacking places of worship belonging to people of other faiths. Those who perpetrate such crimes do not represent Islam, but their own deviated agendas. #QuettaChurchAttack

Politicians are never behind. They make themselves heard.

Outraged, frustrated and saddened by the terrorist attack in #Quetta. Cowards attack the weak, innocent and vulnerable. Adding insult to injury this attack comes a day after our PM declared his government had defeated terrorism. The apathy of the state sickens me.

By the grace of Almighty, 02 Suicide Bombers stopped on entrance of Church in #Quetta. LEAs took 16 mins to complete the op. CCPO &  DC #Quetta along with IG Police #Balochistan lead the operation from forefront.